Rakuten TV offers the best cinema at-home experience with the latest and greatest releases. You can rent or buy your favourite films with no monthly fees, simply pay for what you watch. 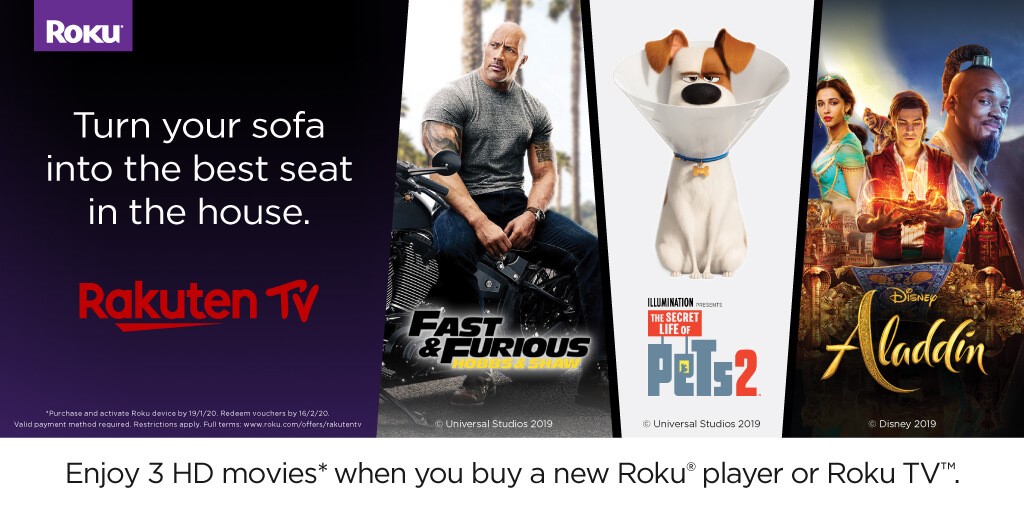 With that in mind, Roku wants to make your holiday season a little better. That’s why now through 19 January 2020, you get 3 HD movies* from Rakuten TV when you buy a new Roku player or Hisense Roku TV. That’s a £41.97 value!

You can select from Rakuten TV’s impressive catalogue of titles, including awesome new releases such as:

THE LION KING
Available from 11 November

Relive the Disney classic with photo-realistic GCI and an all new voice cast featuring Donald Glover and Beyoncé. Watch the movie and then enjoy bonus features.

Return to the phenomenon of Fast and Furious for an explosive adventure with Dwayne Johnson, Jason Statham and newcomer Vanessa Kirby and Idris Elba as enhanced super-soldier Brixton who is determined to unleash a deadly pathogen on the world.

ONCE UPON A TIME IN HOLLYWOOD
Available from 7 December

Quentin Tarantino’s 9th film stars Brad Pitt and Leonardo Di Caprio as they navigate the world of Hollywood in a love-letter to 1960s Hollywood.

ANGEL HAS FALLEN
Available from 14 December

Gerard Butler stars as Secret Service agent Mike Branning who must prove his innocence and uncover the truth after he is charged for failed assassination attempt on the President.

IT: CHAPTER TWO
Available from 30 December

Pennywise returns to haunt the Loser’s club 27 years after they defeated him in the town of Derry in this horror starring Jessica Chastain, James McAvoy and Bill Hader.